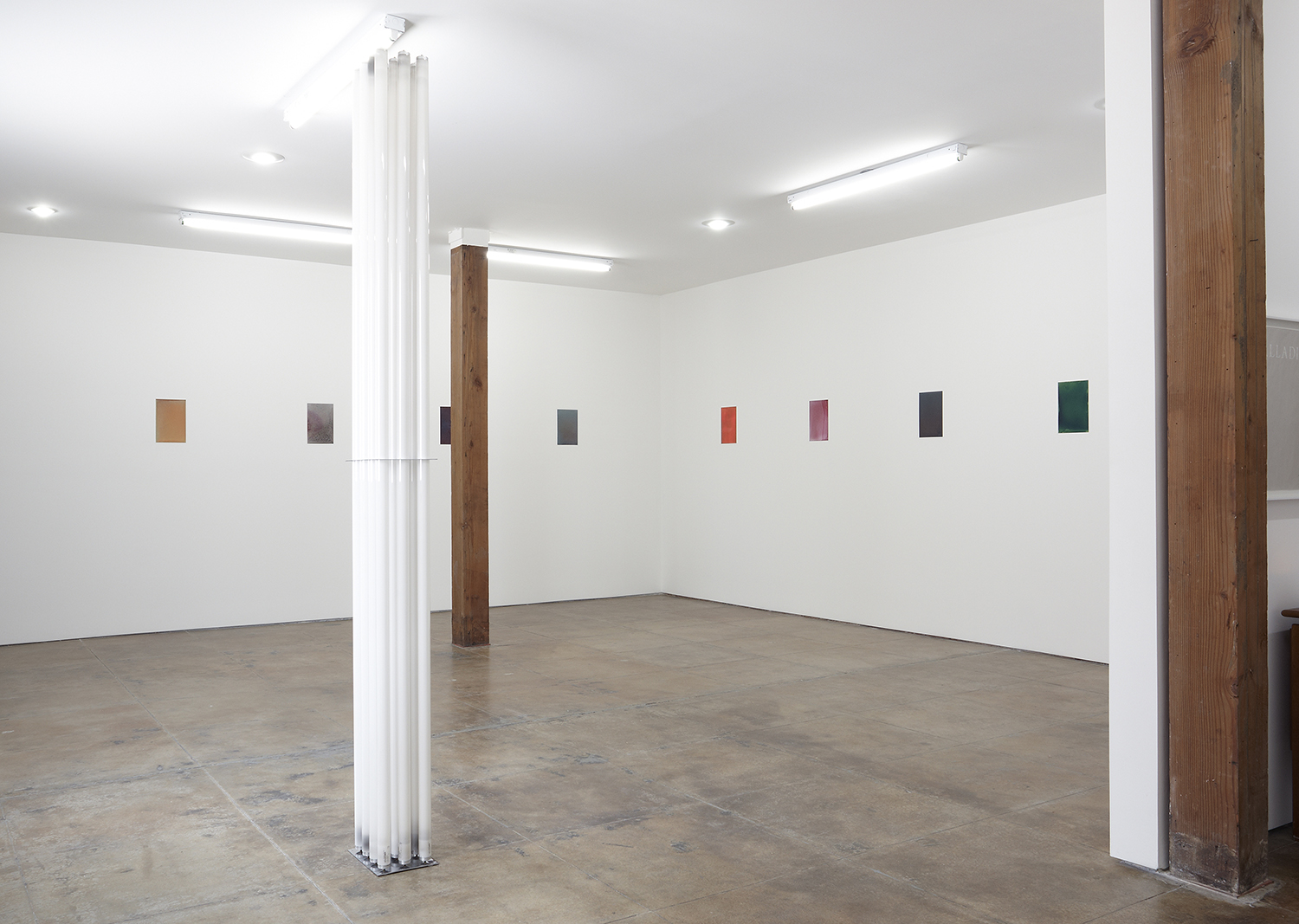 Of his recent exhibition at Young Art in Chinatown, Los Angeles, Jed Ochmanek describes his interest in considering and, if possible, articulating theoretical rates of cognition as found in our response to phenomena.

From his studio ceiling lamps in the "exclusively industrial" enclave of Vernon, California, Jed created a vertical column of twelve eight-foot-long, expended fluorescent light tubes. A fixture of two horizontal chromed plates, like those the paintings are made on but perforated for the bulbs to pass through in one, and the merest notches for the bulbs brass nipples to rest in the bottom plate, manage to just keep the bulbs from toppling.

Initially I had a feeling of dread upon viewing these spent vessels of glass and gas, now inert and useless. Confronted with the dead bulbs, one could readily ask, what are these doing here? Jed is prompting our cognizance of the art in the show. The bulbs were nodes to which agitated electrons flowed and whose contents, affected by the arriving energy, produced the light by which Ochmanek attended to the business of making art. The lighting tubes were as a candle, a finite measure of energy and duration. They are placed here to be considered as a record of those expenditures.

Paint, assumed to have come pre-mixed to a specific consistency as per the ratio of pigment particles to binder/carrier has here been altered for solvency over density, mobility over adherence. Tampering with the factory settings of the paint, Ochmanek has all but nearly freed the pigment particles from their binder, causing them to behave more like sediments carried in a current rather than bonded subjects of the uniform and obedient body of modeling by hand, which paint is. The artist has exchanged a certain visible and pre-present control for the potentialities to be discovered in phenomena that will make themselves known in the behavior of the emancipated paint particles. 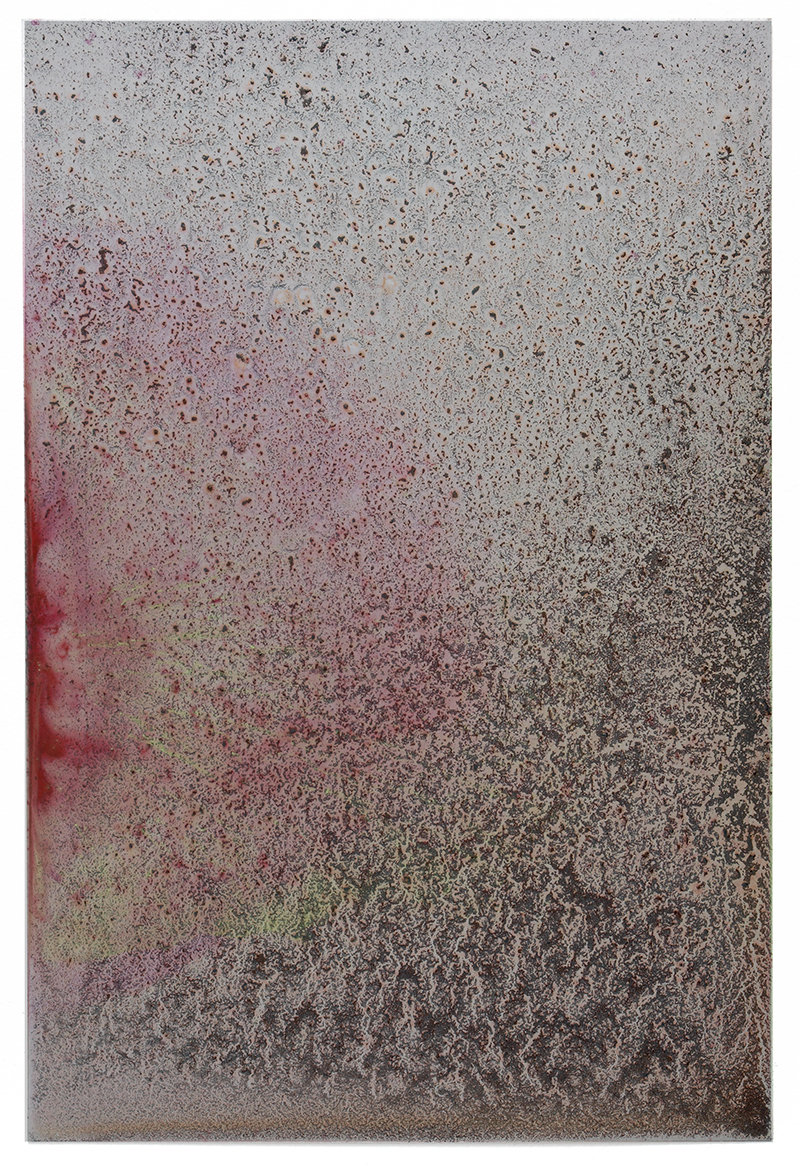 Mounted flush within the walls adjacent to the sculpture, the paintings are made on rectangular chrome metal plates. These dedicated surfaces provide an unyielding and inflexible, non-porous substrate upon which the artist stages his painting experiments. Ochmanek applied a pellucid paint alloy to the hard surface, conducting the flowing binder and sediments across the planar surface. Furthermore, some of the paintings have been buffed by a chrome polishing tool to a highly mirrored finish while still somehow maintaining a transparent wash of color. The surfaces while varied in brightness and color are generally organic feeling, evoking drifting primordial liquid, sea smoke and such insoluble presences.

Despite the thin surfaces and lack of manual traces in the work, I sensed the hands that had held the rigid plates, intuitively finding up and down, the inconstant vertical, horizontal and diagonal bias of the flat and its accordance with the gravitational force pulling upon the contents. We see the artist positioning himself between the attracting gravity and the freed paint particles as they slip towards the planetary mass. Ochmanek is mediating again, here as the variable and unstable element of force, acting in the short interim before inertia stills the phenomenon of motion.

The video projected on the back wall of a narrow space is a close-cropped view of a candle with a flaming wick, occasionally neatly snipped off as it emerges blackened and spent from the flame's body which blows about violently, being subject to a strong current of air. The wind is force feeding the flame an oxygen-rich mixture and consequently the candle, a simple solid fuel stick whose string wick conducts the warmed, liquefied fuel to the event of combustion, is consuming a correspondingly higher measure of itself. 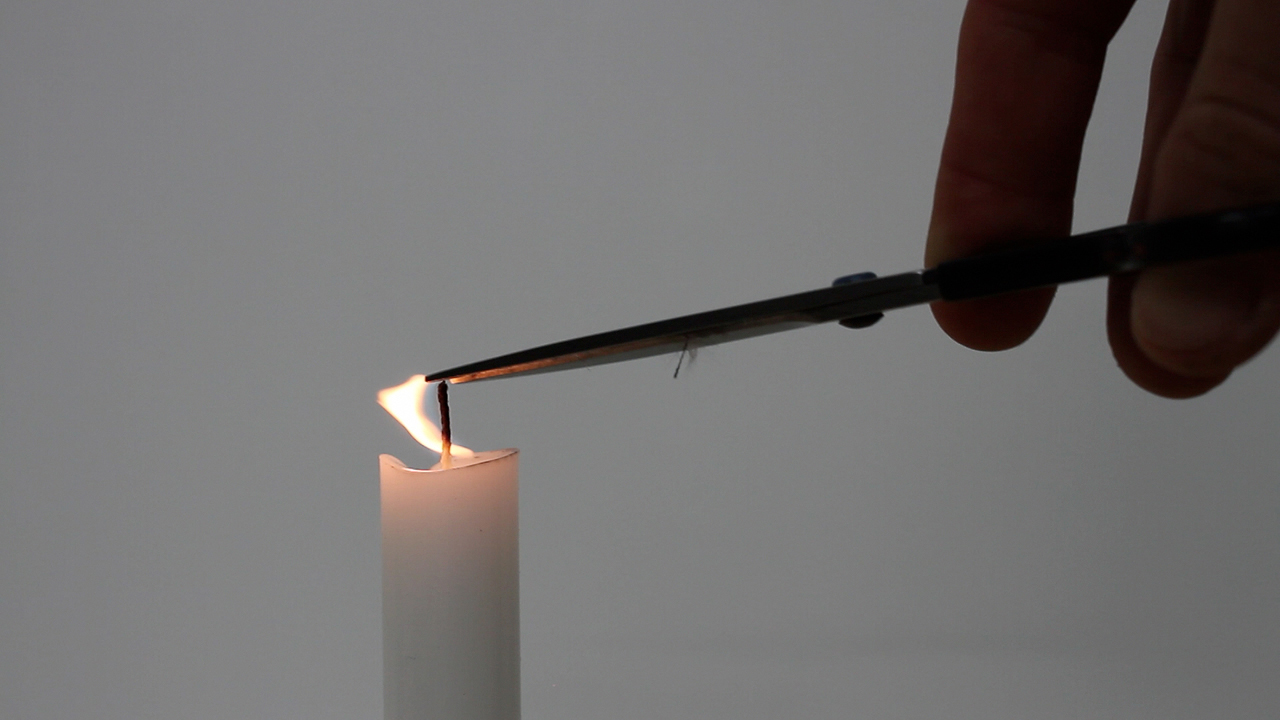 The candle is not alight to illuminate a place or thing and even seems to be serving another purpose besides the allegorical possibilities in its expedited burn rate. The candle is a finite measure of fuel and in most circumstances will burn at a generally regular rate until more or less completely consumed. This is the case with every candle of this volume. The candle is as an hourglass, an instrument whose operation provides a visual model correlating the principle of duration. In the case of the candle in the video, Ochmanek has accelerated the clock speed of the candle.

The exhibition deftly demonstrates principles of phenomena such as time, force, gravity and resistance whose presence can only be known to us, through their appearance in the behavior of objects and matter, including not least, our own.