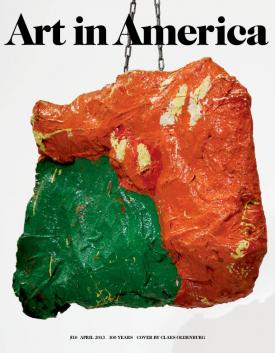 Jed Ochmanek may call his newest series of paintings "flats," but "depth" more accurately captures what was on display in "Breed St.," the artist's third solo exhibition at Young Art. When viewed from the center of the small gallery, Ochmanek's work—a trio of colorful rectangular panels (all 2012) hung flush with the walls and stretching nearly from floor to ceiling—evoked reflected light, fabric and blown-up photographic negatives; up close, each was seen to feature masses of information in the form of paint pigment and dust, resulting in endless strata of texture and detail.

For the last few years, Ochmanek, who graduated from the Rhode Island School of Design in 2005 and is currently living in Los Angeles, has experimented with a technique that involves pouring multiple layers of very thin, oil-based enamel paint onto slim plates of industrial metal, such as mirror-polished stainless steel. During the process, the pigments tend to separate from their binder, drying in unique and unrepeatable patterns, which Ochmanek amplifies by letting dust from the environment settle where it will, layering different colors atop each other and allowing the paint to dry in between pours.

For "Breed St.," Ochmanek used the gallery's architecture as the only limit for his 8-foot-tall, rectangular paintings. Never one to clutter a room, Ochmanek chose one panel in gold (Beekeeper), another in soft pink (Plateaux) and a third a dark denim blue (Dead Flag Blues). Over the gallerist's desk hung two reliefs in cast concrete. Neutral in color but still full of captured texture, these two pieces represented a new type of material process for the artist, which he plans to explore further.

The surfaces of Ochmanek's panels reward attention. With Beekeeper and Plateaux, this crust registers as a grainy quality from a distance; with Dead Flag Blues, on which Ochmanek used a squeegee, it looks more like a tight weave. Traces of Ochmanek's process can also be perceived in the works' gentle gradient shifts, or in the sudden disruption of color within a panel, where the liquid from one pour has obviously obscured the previous pour, producing what looks like a water stain. All in all, the paintings turn on the tension between the layers of detail they contain and their status as "flats"—a word that brings to mind surfaces devoid of any texture. Ochmanek exacerbates the tension by using metal thin as canvas, as well as by relying on devices like Velcro or magnets to hang the panels so snugly against the gallery wall that they often look like they've been painted on. What results is a weighty dialogue with time: while you can try to grasp one of Ochmanek's pieces in an instant, the piece fights back, insisting that you experience to no small degree the duration of its making.